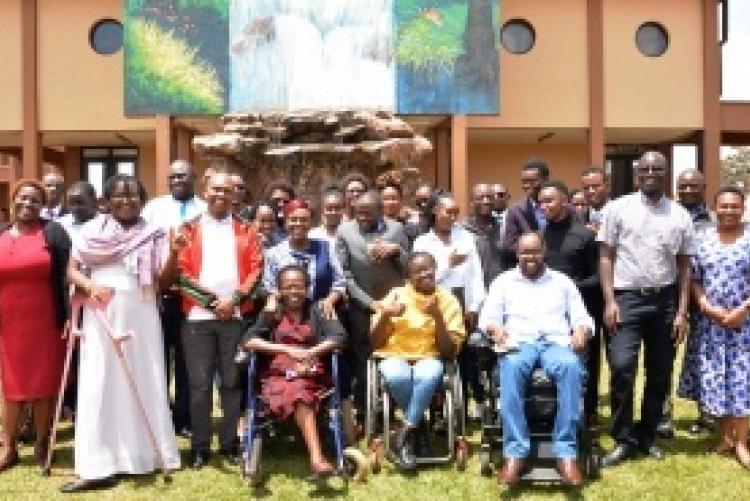 As of December 1, 2022, the University community can walk in a Gender desk and anonymously report cases of Gender based violence, rape and any other form of abuse and receive immediate clinical and psychological care.

This was among the approvals that the O3 Plus Institutional Working Group (IWG) was seeking when they paid a courtesy call on the Vice Chancellor, Prof. Kiama on Tuesday, 18th October, 2022.

The team lead, Prof. Walter Jaoko highlighted the achievements of the project since its inception and the plans that the project has for the rest of the year. Among the plans is the launch of a Gender desk that will coincide with the celebrations of World Aids Day 2022 on December 1, 2022.

The celebrations will be marked by the official launch of the Gender desk, a campaign walk and free check-up of various NCDs led by the University’s Health Services.

“It’s about time the University of Nairobi develops policies on mental health and sexual reproductive health,” remarked the VC on his response to the query on policies raised.

Prof. Kiama commended the team on all its achievements and milestones; When asked to comment about the HIV common course that the University stopped, he elaborated, ‘When those common undergraduate courses were developed there was a need, the University has been incurring high costs due to the delivery of the courses, some students have missed graduations because of missing marks in these courses and as an institution we saw it wise to pause and reevaluate. Is the need still there? What purpose were the courses serving? And is there a better way that the same skills can be delivered to students? We recast and gave the office of the Dean of Students the mandate of teaching these soft skills and life skills through the skills center of excellence virtually.

Prof. Kiama pledged his support to the project and acknowledged that most of the objectives are in line with the University’s strategic plan and fulfills its core values.

On his part, UNESCO Programme Coordinator, Jane Kamau applauded the University on its efforts on intensifying the implementation of this project. She especially applauded the different units that have managed to train staff and students on the various interventions on wellness.

The Dean of Students, Mr. Johnson Kinyua aligned the plans that his office has among them; refurbishment of the student’s centre, building of Gazebos within the university compound, Planning of Talent search event, and a mini sports day as avenues of mainstreaming the student’s well-being.

END_OF_DOCUMENT_TOKEN_TO_BE_REPLACED